Offensive
Player of the Year

Typically, the MVP and the OPOY mirror each other, but while Washington's Mitchell Bronson took the MVP, it was Minnesota's dynamic RB Hardy Matthews getting the nod here, thanks to 1757 yards rushing. ...more

Defensive
Player of the Year

At just 25 years old, the sky is the limit for pass-rusher Jamal Ciccant. The Raiders stud put up a monster season, collecting 17 sacks, just shy of tops in the league, and 53 solo tackles in his 3rd NAFL season. ...more

The Best of the Best

NAFL Hall of Fame - In 2004, Week 1 of the newly-christened North American Football League, the stars were already shining. Tom Brady led the Patriots past an AFC East rival, Peyton Manning threw for over 500 yards for the Colts, Steven Jackson had a nice day as the Rams won easily... Now with so many seasons in our past and spectacular performances each and every day, the NAFL has a legacy of greatness, elite players, coaches and general managers who have shaped the course of football history. They are more than just names on a box score; they are our memories of gridiron glory. Here, we honor those influential few, the Best of the Best in NAFL history. 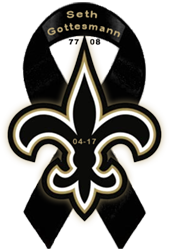